What will post-pandemic real estate look like in NYC? Experts weigh in 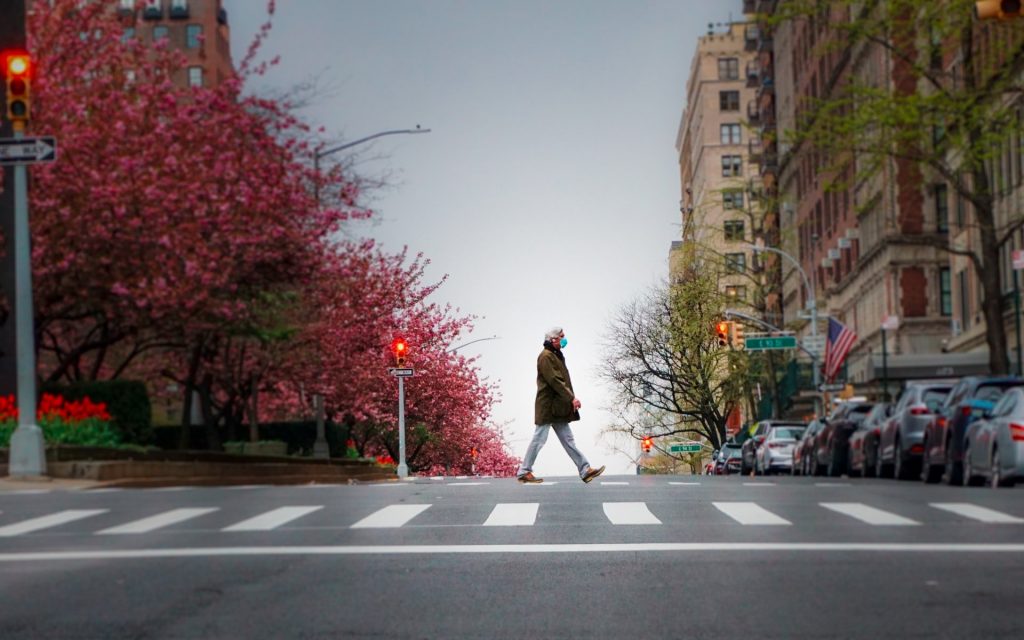 Photo by Clay LeConey on Unsplash

A year ago, there was so much uncertainty surrounding the pandemic and politics, which made real estate somewhat of a gamble, at least in hard-hit New York City. When it came to the headlines, it seemed all anyone could talk about was the mass exodus from the city. Home prices were soaring in the surrounding suburbs, with stories of lines around the block for open houses and bidding wars. But in the city, vacancies were at an unprecedented high.

A year later, though, and a quarter of New Yorkers are vaccinated, and we’re starting to see “normal” life resurface. To understand how the residential real estate market is rebounding, we spoke to experts in the field, including brokers, developers, and data gurus, to get their thoughts on timing, prices, the luxury market, surrounding suburbs, and more.

Why now is the time to buy

In fact, Antin tells us that there were more contracts signed in February 2021 than in any of the previous Februarys, and a 31-percent increase compared to February 2020. But the piece that makes this appealing to buyers is that “while contract activity has exceeded pre-COVID levels, prices still have not,” he explains.

Broker Tania Isacoff Friedland of Warburg Realty rounds this point out. “The combination of historically low interest rates, a bull stock market, and the lack of sales during the months of the shutdown has made the past few months a prime time for buyers to jump into the NYC market. Prior to the pandemic, there had been quite a bit of price capitulation and we were finally starting to see pricing alignment between buyers and sellers.”

John Walkup, co-founder of UrbanDigs, also advises putting the current market into perspective. “We experienced two down cycles since the peak in 2015, both equaling about the same total discount from beginning to end of the cycle — that was about 10-15 percent. Since the pandemic-induced lows last summer, liquidity (bids and deal volume) returned in a big way, and we are at the peak of this activity right now.”

To Walkup’s point of putting things in perspective, most experts will remind New Yorkers of what happened after 9/11 and 2008. “The real estate values in New York City dropped, but only for a short period of time,” says Shaun Pappas of real estate law firm Starr Associates. Speaking to these previous times, Tania Isacoff Friedland says that “once the market starts to pick up, it usually happens fairly quickly.”

What will the real estate market look like this summer?

Summer is not typically the busiest season for purchasing, but so much pent-up demand likely means this year will be different. Plus, there are a lot of external factors that will play a role, for example, the economy. “If you look at the job growth rate, unemployment is going down faster in metro New York City than in much of the United States,” says architect Victor F. Body-Lawson of Body Lawson Associates. And of course, there’s the accelerated vaccination effort.

Therefore, most experts with whom we spoke suggest getting in before the anticipated summer rush. “We are in the midst of the Spring market, and there is not a ton of good inventory. Sellers are negotiating still, but we are seeing bidding wars again. Therefore, I would advise a buyer to jump in now if they are looking,” says broker Michael J. Franco of Compass.

Tania Isacoff Friedland seconds the point that waiting too long to get into the market could prove detrimental. “While everyone wants to wait until the market hits rock bottom, timing the market is tricky, and we usually don’t know that we’ve reached the bottom until we see it in the rearview mirror. So buyers should jump in before they miss out on buying opportunities and we see a paradigm shift from a buyer’s market to a seller’s market.”

To this end, Jared Della Valle, CEO and founder of Alloy Development, says, “As the current demand starts to outpace the supply and with the slow down in development during the pandemic, we could see supply shortages in some markets driving to increases in pricing.”

Facts and figures aside, there’s also no denying the effect of coming out of a long winter, as Shlomi Avdoo, principal and founder of Avdoo & Partners notes. “As the weather warms up and more people are comfortable to go outdoors again, we expect that more buyers will be out looking in the city.

What’s going on with the luxury market?

During the summer of 2020, most transactions were in the sub-$2 million market, a trend that can be attributed to the fact that many high-end buyers were those who had the means to leave the city at the height of the pandemic. But now the higher-end market is starting to catch up. Jared Antin tells us that 66 percent more $5 to 10 million contracts were signed in February compared to January and 33 percent more compared to February 2020.

What neighborhood should we watch?

“Midtown will be an interesting neighborhood to watch,” said Jared Antin. “If people who moved permanently out of the city end up returning for work, will they decide to buy or rent a smaller place centrally located to their office as a pied-a-terre instead of a larger family home in a different neighborhood?”

Another reason to keep an eye on Midtown is the proposal to turn empty office space into residential units, specifically affordable housing. The legislation would allow New York to buy financially distressed commercial buildings and hotels and convert them into housing for low-income and homeless New Yorkers.

In addition, John Walkup notes that “Midtown appears to be underperforming relative to the other neighborhoods, and buyers should still have some leverage there.”

An overwhelming number of participants also point to Brooklyn, which has waterfront neighborhoods with access to open space, luxury new developments that are more affordable than those in Manhattan, and areas that have a somewhat suburban feel. And the numbers back this up. The Real Estate Board of New York’s 2020 end-of-year report showed a sales volume increase of 90 percent in Brooklyn.

What about everyone who left?

It can’t be denied that there are a good amount of people who left the city for good. With so many companies having made the move to permanent remote work, there’s no incentive for them to come back. But Michael J. Franco reminds us that some people’s departures were temporary. “There are some sellers who left the city but held out on listing their apartments because of the market circumstances.”

And for some of these temporary departees, being outside the city will actually cause them to consider a new home in the city. Nicole Beauchamp, an agent at Engel & Volkers, tells us: “Some of my clients who decamped to their second homes (which have now become co-primary residences) are now rethinking how much more space they will need in the city, and that is guiding the hunt to upsize.”

Schools are another very important factor. “Once there is the ability to work full-time in the office and have children back full-time in school (without the need or risk of closure and remote working and learning), the individuals and families will need to establish full-time residence in those areas again,” Shaun Pappas points out.

It’s also important to note that this wasn’t a phenomenon entirely unique to New York. “Cities all over the world exhibited mass migrations to the countryside, to less densely populated areas… New York is, and will likely always remain, one of five epicenters worldwide for culture, commerce, and professional and human diversity. This is not going to change,” states Joshua Schuster, managing principal of Silverback Development.

Are people still going to be leaving for the Hamptons, Upstate, and Jersey?

The general consensus is, yes. Part of this is because you’ll always have people who “age out of” or are priced out of New York City based on their space and lifestyle needs. And it seems that the pandemic has only accelerated this process.

That acceleration can be seen nowhere more than upstate. According to Houlihan Lawrence’s Q4 2020 Market Report, Putnam and Dutchess counties saw a 269-percent increase in home sales $1 million and over. And in Westchester county, sales $2M and higher grew by approximately 53 percent. As the report explained, “The rare combination of low inventory, a surge of highly motivated buyers, coupled with low-interest rates and a booming stock market, created a seller’s market and generated record-breaking sales.”

Down in New Jersey, Jed Lowry, Division Vice President at Landsea Homes, is the developer behind Weehawken, NJ’s Avora. He tells us that while he used to say this Hudson County city (which has direct skyline views of Hudson Yards) “was New Jersey’s best-kept secret,” now “clearly the word has gotten out.” He even goes as far as to say that it’s not just NYC transplants, but those from more traditionally popular Jersey cities. “We are seeing more and more buyers relocating from Hoboken and Jersey City because they want more space, better amenities, and the great quality of life that comes with living right at a waterfront park.”

And this type of luxury lifestyle is now spreading further down the NJ coast. Case in point, the Asbury Ocean Club in Asbury Park, where in August, a $5.9 million penthouse became the most expensive home ever sold in the city. Jodi Stasse, senior managing director of sales for Corcoran Sunshine Marketing Group, tells us: “We have seen an increase in prospects from NYC over the past year. We got their attention because of the highly designed nature of the building and the value compared to the Hamptons or Shelter Island. The accessibility to NYC makes this property so compelling, the New York prospects started purchasing. Once they experience the lifestyle, we have seen some of those prospects shift their primary residence to Asbury Ocean Club and some will have a smaller apartment in NYC when the time feels right.”

Will the way we buy real estate change forever?

One thing most experts can agree on is that the virtual home tour is here to stay. It is, of course, ideal for buyers who aren’t local, but it’s a way for people to narrow down their search initially before taking the time to go out to various properties.

At the same time, however, it seems likely that large, open houses will return when it’s safe. John Walkup makes the interesting point that “packed” open houses can often “fuel a ‘herd-like’ mentality for buyers, who see 20 or more other potential competitive buyers all around them.”

It may seem like a small thing, but several people with whom we spoke commented on the appeal of Docusign to complete applications and closings. Compass agent Vickey Barron jokes, “Remember the days of standing at a bank on Fridays to make deposits? Now we do it on our phone. It doesn’t make sense to go backward at this point. If we can use cars, why would we revert back to buggies? ”