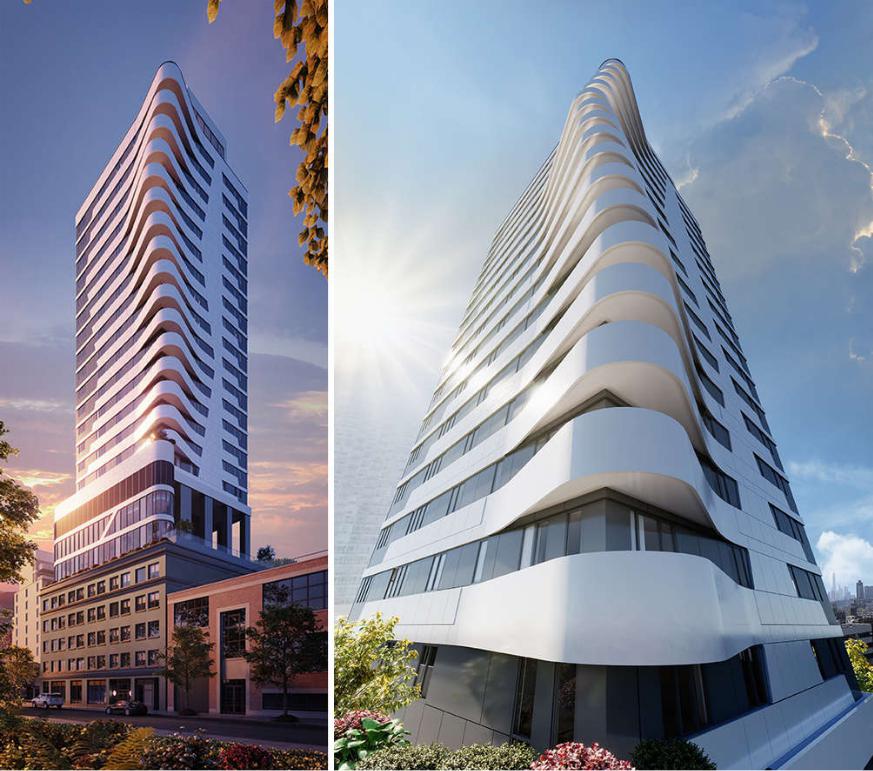 As completion approaches at Long Island City’s latest high-rise, Silverback Development announces the sales launch for 109 luxury condos at Hero LIC, a 22-story tower at 24-16 Queens Plaza South at the foot of the Queensboro Bridge. The Woods Bagot design perches a sleek Art Moderne tower atop a prewar base, preserving a touch of history at one of the oldest neighborhoods in Queens. The units, which range from studios to two-bedrooms, are now available from $500,000.

The white facade, crossed with horizontal black bands and accented with curved balconied at the corners, contrasts against the ubiquitous blue glass of the Long Island City skyline. The architects fashioned the junction between the historic facade and the new tower into a one-of-a-kind common area, where a 3,000-square-foot terrace meanders between the 30-foot-tall pillars. Curved floor-to-ceiling glass wall at the fitness center faces a lushly-planted parapet. The second deck perches atop the high-rise and offers sweeping panoramas of the Long Island City skyline, the graceful span of the Queensboro Bridge, and Midtown Manhattan across the East River.

In addition, Hero LIC offers its residents a total of 15,000 square feet of amenities, which include a 24/7 attended lobby with a doorman, barbecue grills at the roof deck, sky lounge, yoga studio, multipurpose dining space, package room, bike storage, and a pet spa.

Units are outfitted with washers and dryers, oak floors, Caesarstone counters in the kitchens, and tempered-glass showers in the bathrooms. Loft duplexes comprise the building’s penthouses.

Hero LIC is but one among numerous new residential towers that have created a brand new skyline at Long Island City’s Court Square district over the past two years. However, the building is among the few that offers condominiums rather than rentals, which is a sign of developers’ growing faith in the surging local market. Some of the neighborhood’s few other condo offers include the Independent LIC next door, which converted from rentals just two years after completion, and the Skyline Tower a few blocks to the south, which will soon stand as the city’s tallest building outside of Manhattan. Further condo projects are sure to arrive at the transit-rich neighborhood across the river from Midtown, but at the moment, the offerings at the Hero are as rarified as its eye-catching design.